Why Use IsChecked Instead of Pos

Let’s look at how the LANGUAGE_SPOKEN variable would be set up. Since a person could speak multiple languages we will use a check box and the language question might look like: 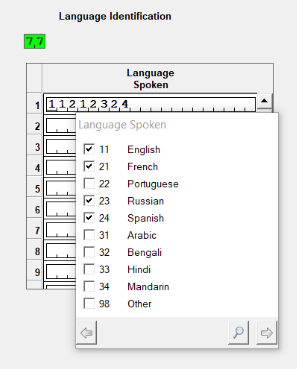 Here English, French, Russian, and Spanish are checked. In previous versions of CSPro we would use the pos function to see if a specific language was checked. For example, if we wanted to know if French was checked we would use:

The error message “French is checked” would be issued. Continuing with our example we could ask if Russian is checked:

If we asked if Hindi is checked:

The pos function would return a 0 (false) and the message “Hindi is not checked” would be issued.

The pos would return a 6 (true) and the message “Bengali is checked” would be issued.

The check box codes are placed at uniformly spaced offsets based on the size of the code. For example, if the check box field has a length of 20 and each code has a length of 2, then each selected code is placed in the respective 2-digit offset. That is, positions 1-2 for the 1st code, position 3-4 for the next code, and so on.

The data are stored in the file as shown here:

The pos function does not look by offset, but instead looks for a substring match. Unfortunately, the substring “32” does exist in the data and a false match is found. In previous versions of CSPro we would need to loop through the string being searched by 2 for the language code:

The ischecked function returns a 0 (false) since “32” is not found within one of the uniformly spaced offsets. To do this CSPro requires the codes to be a uniform length. Notice all codes in this example were length 2.